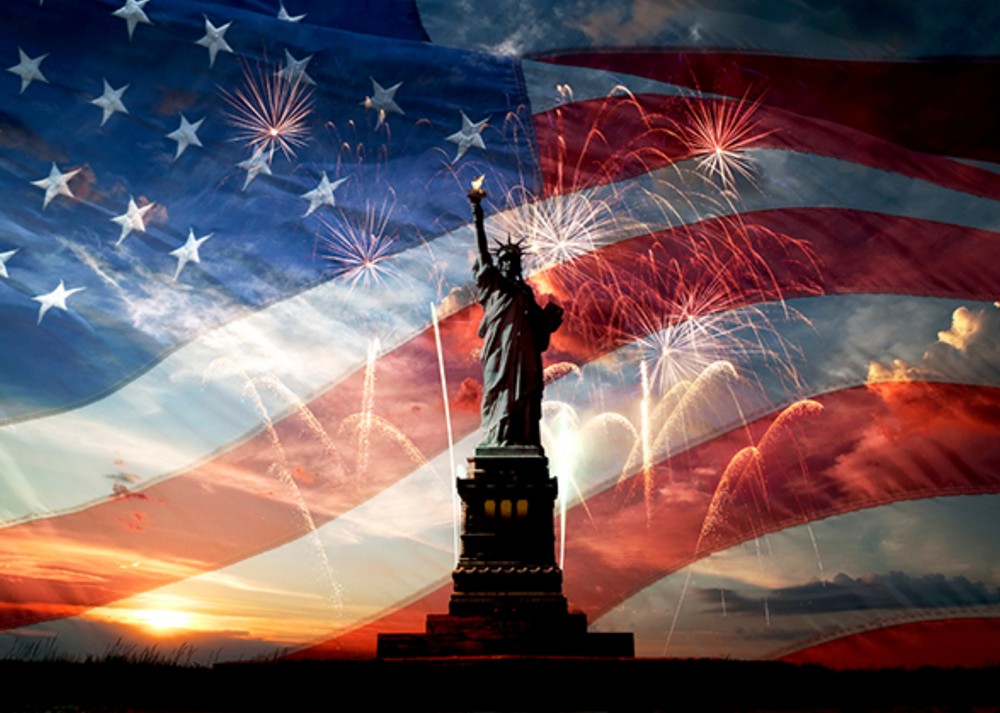 May God continue to bless America! 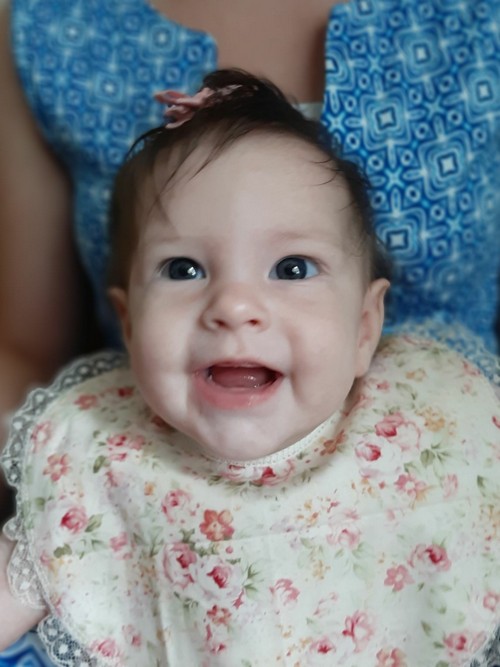 Edith Rose, Willis & Debby’s least one, is sporting a new bib her Mama made her. Little Edie is about 4 months old.

From the desk of Bill

We are half way though 2020. What a year it has been. We’ve seen the impeachment of a sitting President, a pandemic virus from China, protests, riots, looting and vandalism. I suspect this list will grow a good bit larger by the time elections roll around this November.
It turned out the impeachment seems to have basically been a political hit job. No evidence was found that a crime was committed by the President, thus the impeachment should have never happened. The whole process seems to have been very flawed. Now we get to hear about an investigation of the investigation.

The virus from China has totally disrupted our economy and the lifestyles of millions of people. In the end, the chance of dying because of this virus (if you are not living in an assisted living facility) is about the same as being struck by lightning if you have lived for 60 years. Of course, this is statistically and any deaths are tragic.

According to the CDC (Center for Disease Control), about 60,000 people who were not in assisted living facilities died with (but not necessarily because of) the virus. Each year about 1,000 people are struck by lightning. In 60 years, that would mean 60,000 people would be struck by lightning — a familiar number. While we obviously should use good sense regarding our health, perhaps the virus is not quite as bad as we have been told. (The following numbers are for the United States, not the world.)

Virus from China deaths are the approximate number of people who died in 2020 with (but not necessarily because of) the virus that were NOT living in assisted living facilities.

Probably the most disturbing event to me this year is the rioting, looting and vandalism. Certainly, I have no problem with demonstrations or protests, but when they turn violent, I have a serious problem. I understand that the protests were basically hijacked by hoodlums, but America should not tolerate such behavior. Stealing merchandise, vandalizing, killing, raping and other dastardly acts are not the acts of a protest, but simply lawlessness. Now, some hoodlums have taken over several blocks of a city and the mayor says they are “patriots”? In the United States? Really? Lawlessness by any other name is still lawlessness.

On the personal side, Kandy and I learned we are expecting our 36th grandchild about December this year. While I understand the concern some have about overpopulation, what will happen to us as a nation and a world if responsible people don’t have children?

Keep looking up. The best is yet to come!

Most homes built in our area are built on either slabs-on-grade (concrete poured over fill dirt) or foundations with crawlspaces. While there are some cost advantages to slabs on grade, there are a number of advantages to homes built with a crawlspace. (A crawlspace is where there is room between the bottom of the floor and the ground.)

Typically with a traditional crawlspace, the bottom of the floor of the home is insulated. This insulation can be fiberglass or (better) spray-in foam. There is another alternative which is probably better than insulating the floor. That is to seal the crawlspace and insulate the foundation walls. 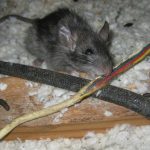 If your crawlspace has even a small opening, you are subject to unwanted visitors. For some reason, mice and other rodents seem to really like the taste of insulation on wires. This is not a good thing.

If your floor is insulated with spray foam, that is good for several reasons: it seals any holes that might be in your floor (where there are penetrations, for example), it conforms tightly to the floor, so there are no air leaks to nullify the thermal barrier and it provides a good R rating. Spray-in foam can also insulate any pipes under the floor.

Like anything else, there are downsides to foam insulation. Since wires and pipes are covered with foam, it can be difficult to trace them and figure out what goes where if there is a problem. The foam can also distort the location of leaks. If you have a leaky pipe, water may flow over or through the foam and drip out far from the actual leak. To find the leak, you have to dig out foam without damaging hidden wires and pipes. This is a difficult (thus expensive) task.

With fiberglass insulation, there seems to be a tendency for it to trap moisture between the insulation and the floor which can cause serious problems (buckling floors, mold, mildew and rot). Moisture under houses is a real issue here in the appropriately named Lowcountry.

If only your floor is insulated and you have HVAC air handlers and ducts under your home, they are also subject to moisture and consequently will rust after a few years.

What is a good alternative? A sealed crawlspace solves a number of these issues. With a sealed crawlspace, the insulation is not on the bottom of the floor, but on the foundation walls. The floor of the crawlspace has to have a vapor barrier (as it should in any home). Typically, we pour a thin (2 or 3 inches thick) concrete slab on the ground in the crawlspace (called a “rat slab” for obvious reasons — it makes it very difficult for rats or other rodents to find a way into the crawl space).

Insulation is (typically) sprayed on the foundation walls down to about 6″ above the ground. The lower few inches of the foundation wall is left bare so your termite service can make sure no termites are tunneling up to your house. The dirt tubes subterranean termites have to build to reach wood are clearly visible and can be treated. 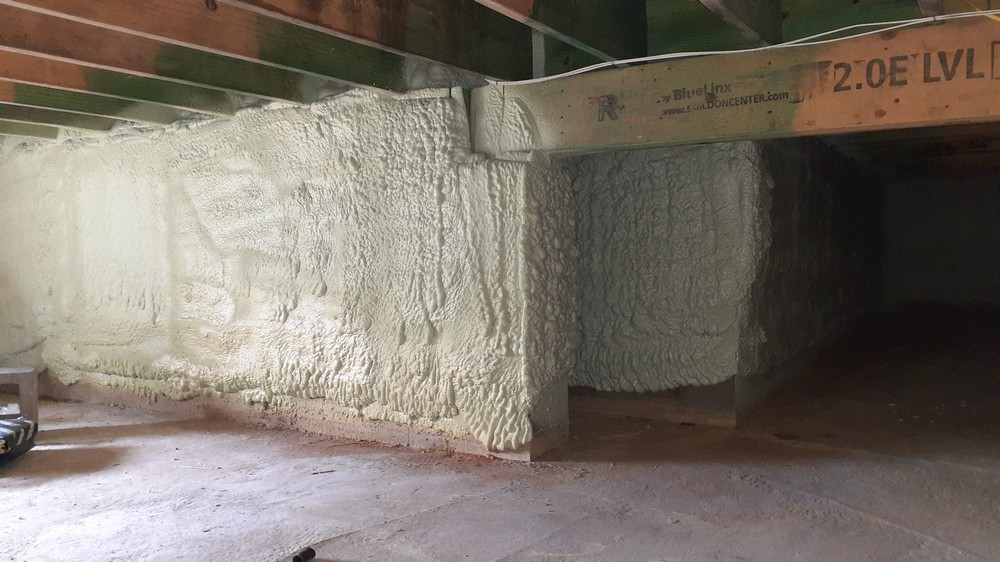 This is a photo of a crawlspace we sealed on a home we built. Notice the gap in insulation at the bottom near the rat slab. The termite technician is able to carefully look below the insulation for any signs of termite tubes.

A big plus for sealed crawlspaces is the bottom of the floor is exposed along with pipes, ducting and wiring so troubleshooting and repairing items is much easier. Under floor leaks are easy to locate. The sealed crawlspace also provides an environment much better for any HVAC equipment (air handlers and ducts, for example) that may be under your home. Sealing the crawlspace also makes rodent infiltration much less likely.

How about the elephant in the room: Cost? For new construction, the cost of a sealed crawlspace is about the same as foaming the floor because less insulation is needed (the area of the foundation walls is usually less than the floor area). A rat slab adds to the cost. All things considered, the difference in cost between spraying the floor and sealing the crawlspace is not really much. You should consider having a sealed crawlspace under your home if you are going to build. If you have an existing home and it is not a slab on the ground, you might be able to seal the crawlspace without spending a fortune. Call us, we will look at your situation and explain options to you. No cost to you and no obligation, of course. Call us. We can help.

Next month, we plan to discuss exterior paint. Don’t miss it.