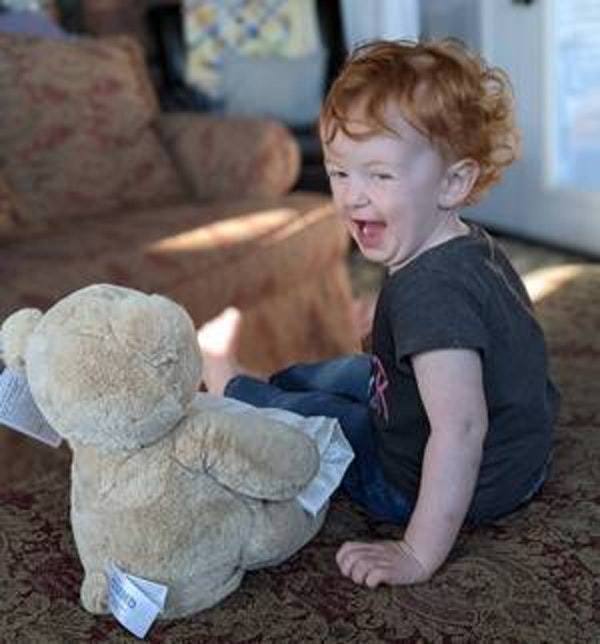 Ingrid (1 1/2 years old), our 34th grandchild and 12th granddaughter is chatting with an action bear we sent her little brother. The bear pulls the white blanket over its face playing “Hide and seek.” 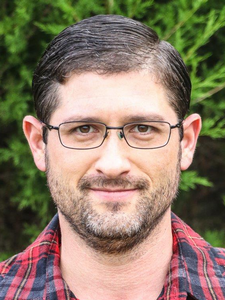 From the Desk of Willis

Happy spring everyone! It has been a few months since I have last written and a lot has transpired since then. We have made it through the holidays, through a tumultuous inauguration, into a new federal government administration and into spring! Business slowed a bit for us during the winter but we have picked back up and it looks like it will be a busy year. Brays Island has been selling existing homes at a record pace and there are several new homes coming out of the ground as well.

This is in spite of the record high material costs that we are currently experiencing. I can’t predict the future but my guess is that these conditions will persist through the better part of this year. With the new administration it’s hard to predict what will happen after that. A simple stroke of a pen ended the Keystone pipeline and led to the increase of gas prices by 50% in only 1 month’s time. Yes, it’s more complicated than that, but that’s how the market reacts and all of those reactions drive prices, typically higher.

I’m about to be long-winded but I want to share some thoughts about the current situation in our country. If you want to get right to the bones of our newsletter feel free to skip the next few paragraphs and read about “Strength of Materials” in home construction. What I’m going to share is more related to “strength of America”.

The uncertainty of the new federal administration is definitely of concern but there is something else that is even more concerning to me and that is the “cancel culture” engulfing society. I won’t go into the ‘who’ of the matter (much) but the dangers of this philosophy need to be understood by all. This country was founded because groups of people were being persecuted for their religious beliefs and were not allowed to freely express their views. They came to America so that they could be free to worship and speak as they please. This is why our founding fathers wrote the first amendment to the Constitution protecting the free exercise of religion as well as the freedom of speech and the press. These are fundamental rights that Americans expect to have and often take for granted. However, those rights are now being attacked on a daily basis and in many ways the government is “aiding and abetting” those attacks. We are even seeing members of Congress advocating for the silencing and dismissal of certain people for holding views that run contrary to the popular ideology of the day.

I expect many Americans have noticed the “cancel culture” problem but don’t really know what to do about it. We often feel out of control in the world around us and many people simply watch the “news” (propaganda) and then fret. Others will talk about it with all of their friends so that their friends will then fret with them. For years we have been “fretting” about the problems in our country but few of us ever do anything about them. We simply go on about our business hoping things will get better if we complain enough or elect the right person. Well, that response has brought us to where we are in our country today. If we like where we are and where we are headed then we should simply continue doing the things we have been doing for so many years. If we don’t like where we are headed then maybe we can make some changes. If we really want our freedoms back then we will have to fight for them and sacrifice for them. By fight I mean stand up to the bullies that want to cancel our voices. By sacrifice I mean give up some of our modern conveniences and luxuries in order to thwart those who are doing the silencing.

One of the greatest conveniences and luxuries of modern times has been Amazon.com. This company was started with good intentions and accomplished amazing things in the world of commerce. They have been a huge benefit to many people on both the buying and selling end of things. However, in recent years they have taken a sharp turn to the left and gone off the rails in my opinion. When they decided to cancel President Trump without reason or cause that was when I decided I needed to cancel Amazon. (Twitter canceled Trump first and then Amazon canceled Parler when Trump moved to that platform) Here’s how I do/did it. 1) Canceled Amazon Prime membership. 2) Decided to buy from other businesses instead. 3) Use Amazon as my personal shopper to locate business names and then go directly to the business that was selling through Amazon. 4) Only buy from Amazon when absolutely necessary in order to acquire a part or supply that I need for a customer in a hurry. Those moves are inconvenient and require sacrifice but I don’t feel guilty for supporting an unethical company. I also add 20% more into the pockets of the businesses that were selling through Amazon by going directly to them instead. (For the record I do not allow my ideological views to interfere with service to my customers because that would essentially be doing the same thing that Amazon is to me.)

I’m not just picking on Amazon but rather using them as an example. This is just one of many ways we Americans can fight back against the cancel culture that has engulfed us. I believe that we must fight to regain our freedom of speech. If we lose this fundamental American right then we have lost what makes America great above nearly every other country in the world.

Back about 50 years ago, I studied a course in college entitled Strength of Materials. It dealt with how different elements react to different forces, that is when you load a member, what does it do?

There are basically two types of loading that apply to building construction: axial and transverse. (There is a third type of load: torsion or twisting, but that seldom is a concern in residential construction.) Axial loading is putting pressure lengthwise (along the axis, hence the name). The primary loading of studs in a wall is axial, i.e., holding up the roof or second floor. Transverse loading is when the load is trying to bend or flex the member. Joists (ceiling and floor) have primarily transverse loading. 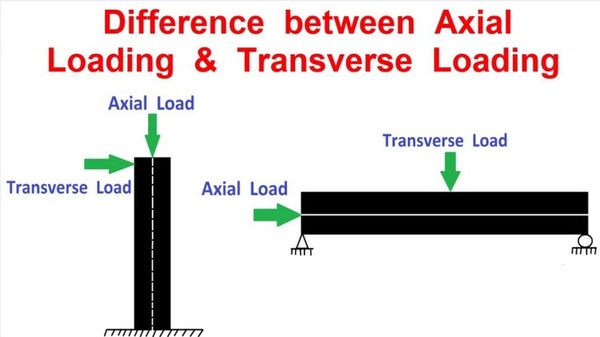 Axial loads are applied on the axis of the element under consideration. Transverse loads try to bend the element. Dimensional lumber is very strong under axial loading if it does not buckle. It is not so strong in its resistance from flexing (or worse) under transverse loading.

Did you ever wonder why studs are always perpendicular to the plywood sheathing. If they laid flat on the plywood (with the 4 inch side against the plywood), the walls could be thinner giving you more floor space. There are a couple of reasons for making the studs perpendicular to the plywood walls (with the 2 inch side against the plywood). One reason is a member is much stronger when the long dimension is parallel to the loading. While normally, the stud loading is axial (supporting the second floor or roof), during wind storms, they can have significant transverse force on them. Attaching the studs perpendicular makes them resistant to the wind loads.

A second reason for making the studs perpendicular to the sheathing is for bracing against buckling. Since the plywood skin is nailed to the stud at relatively close intervals, the plywood will hold the stud straight and prevent buckling.

Although it might not seem too obvious at first, a piece of lumber is able to resist transverse loads if its long dimension (the “4” in a “2×4”) is inline with the load. If a board is laying flat and the load is pushing down on it, the boards strength is proportional to its width. So if you double the width, you have twice the strength. However if the board is standing, the strength of the member is proportional to the square of the height. If you double the height of a board, you have 4 times (2 squared) the strength. That is why all transverse load bearing materials are in line with the anticipated loading.

The length of the span that is supported is also important when considering transversal loads. The longer the span, the stronger the supporting element has to be.

Keep in mind, a failure in not necessarily a catastrophic failure (where the member collapses or breaks), but it can also be excessive flexing. Who wants a “bouncy” or sagging floor? If the joists are not sized properly, that is what you will have.

With axial loading, the orientation does not matter, however one has to be alert to buckling where the supporting member bends in the middle and breaks. Buckling failures are serious because there is usually little warning. If a beam supporting a transverse load is too weak, it will flex a good bit before failing, so you have warning. Buckling failures don’t give much warning before they collapse.

To prevent buckling failures, often a board is nailed perpendicular to the supporting member to prevent it from flexing and failing. With studs, the plywood sheathing prevents the studs from flexing making them much stronger. That is another reason studs are perpendicular to the plywood sheathing. If you can prevent buckling failures, lumber can support tremendous loads. 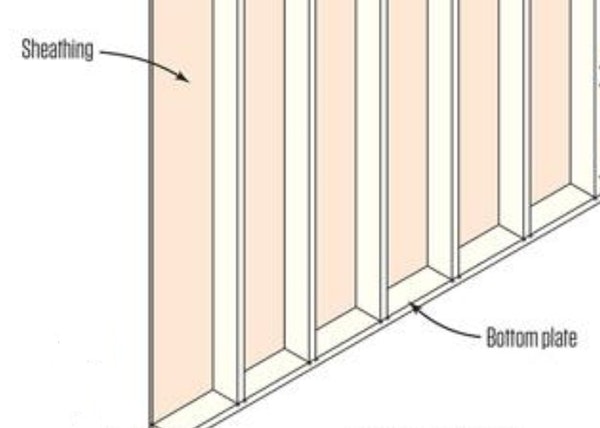 This sketch of a typical wall section shows the studs (vertical boards) that are joined with a butt joint at the top and bottom to the plates. Plywood (salmon color) is attached to the studs and plates. The plywood keeps the studs from buckling, keeps the wall square as well as provides a solid outer wall for siding installation.

The plywood sheathing also keeps the walls plumb and straight. Studs are nailed to the top and bottom plate in butt joints – that is they don’t overlap the plates they just butt into the plates. A butt joint is are not nearly as rigid as a lap joint. Once the studs and plates have sheathing nailed to them they do become very rigid. The sheathing also keeps the wall or roof square and braced. 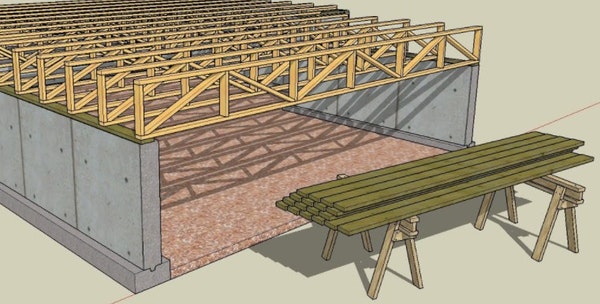 Trusses are typically made of triangles, a very strong shape. They change much of the transverse loading to axial loading. Notice the entire span has been divided into 6 shorter spans by the truss.

Do you really need to understand Strength of Materials to have a solid house built? Of course not. Just call or text us (843 846 2500). We can help. We understand loading and how to prevent failures.

What is soil engineering and why you should care.