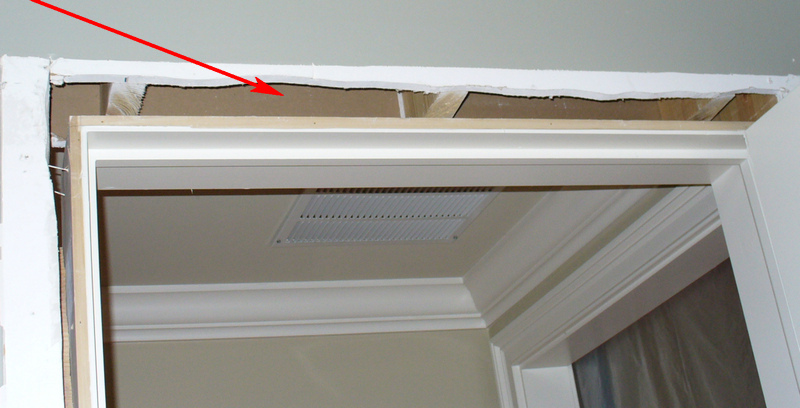 Where is the header?

The newest member of the Willis Sinclair Homes team.

Olivia Jane Ponds, our newest member, arrived on September 10. She is now (at this writing) about 2½ months old. 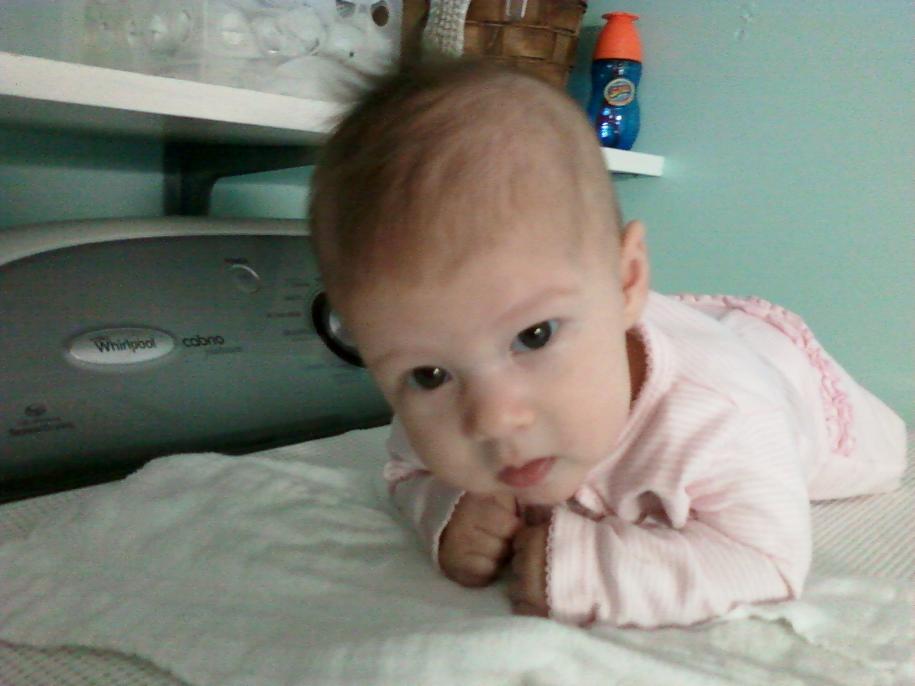 With just a little bit of help, Jane was able to pick up her head and look around.

Jane is a bright, happy little girl. She is Willis and Debby’s sixth child. Their lineup now includes:

Jane is Kandy and my 29th grandchild.

The past year has been really busy for us here at Willis Sinclair Homes.

When we do remedial work (remodels and additions), we are often surprised by the workmanship we see. Our philosophy (personally and as a company) is to do things properly and re-do them if necessary. Like Publix, we will never knowingly disappoint our clients.

Sometimes, we have to rework areas or replace materials. We will do that at our expense if we did not do it right the first time. We think long term, not short term. We know happy clients are the key to our success. Let us make you happy.

How was your framing done?

With tight joints and strong headers,

And quality second to none.

(with apologies to, Mary, Mary, quite contrary, How does your garden grow…)

This past year, we did some remodeling on a home built about six or seven years ago. The home was built by one of the more popular builders in our area.

One of the steps in our remodel was relocating a doorway. This meant we had to remove a door, close the opening and reinstall the door.

When we removed the casing on the door, we were a bit surprised to see there was no header over the door. (See the cover photo.) 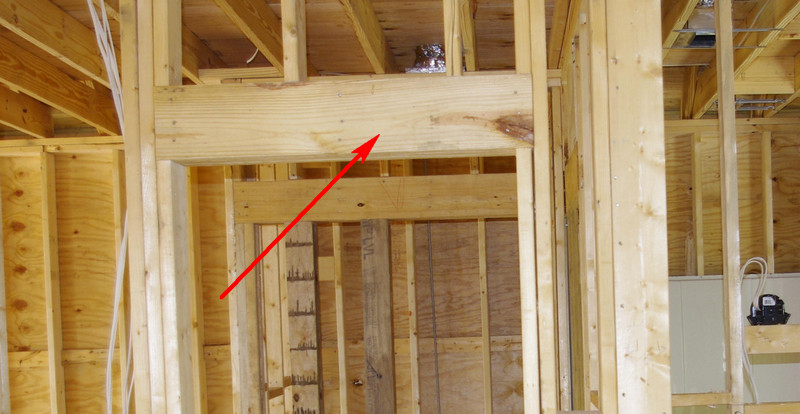 A typically framed doorway with a solid header (red arrow) over it. A second header is visible on the far side of the room.

Doors and windows should have a structural member, a header, over them.

When we removed the sheet rock around the door opening, it became clear what happened: there had been a header, but it was cut out. 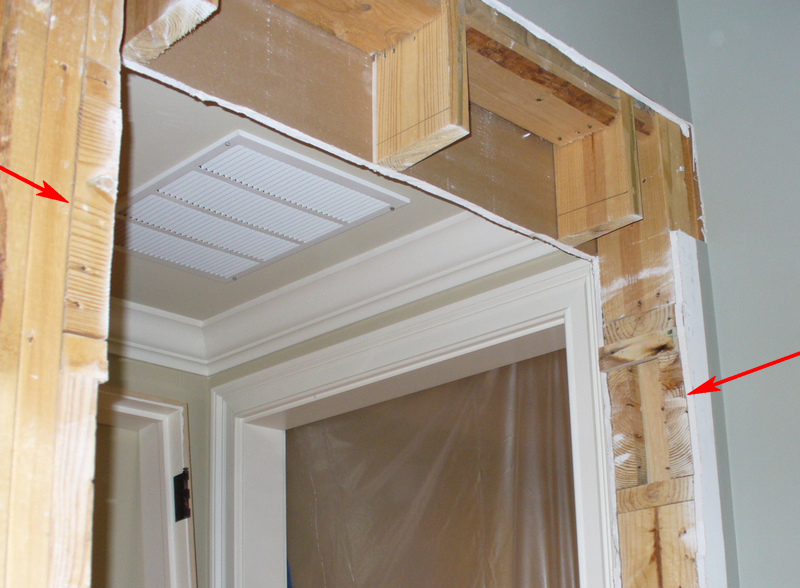 The incorrectly located header was simply cut out and not replaced. The red arrows point to each end of the cut out header.

The building inspector did not catch it since he likely inspected after insulation and before drywall. Things would look fine then unless he happened to note the eight foot door on the drawing. Once the drywall was up and the doors were installed and trimmed, it was impossible to see the header was missing.

Building inspectors cannot protect home owners from shoddy workmanship such as this. A contractor who is not on the scene often and watching also cannot prevent it. You need a contractor committed to providing precise, quality work, who will not tolerate poor workmanship and who is on the job

Sadly, the headerless door was not the only evidence of poor workmanship from this popular contractor. The door frame itself was shimmed very poorly. 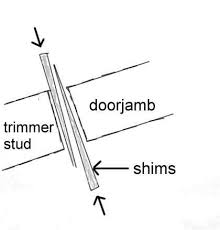 The proper use of shims to install windows and doors.

When doors are installed, the framing opening is always too large because often the framing lumber is not perfectly flat or plumb. By providing some space on either side of the door, small, triangular pieces of wood, called shims are used to fill the space and keep the door jamb perfectly straight. Shims can also compensate for twisted framing lumber. 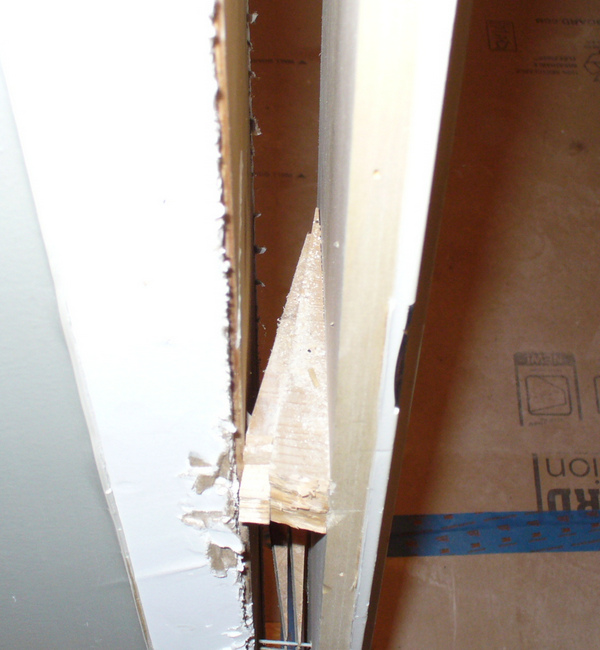 Notice the shims. There is nothing at all to support the far side of the door jamb.

This door was also shimmed, but not properly. The door jamb should be supported on both sides by shims. With shims like this, the door frame will not be solid and over the years, the door is likely to sag. Sheet rock is also likely to crack with no header, particularly on this load bearing wall.

Studs are vertical framing members that form walls. Atop and below the studs are members called plates: sill plates on the bottom and top plates on the top. One purpose of the top plate is to tie the walls together tightly. Typically a double top plate is used so if two walls intersect, the main wall will have at least one plate that is continuous. There should never be a break in both of the top plates at the same location.

Look at the top plates inside the red circle.