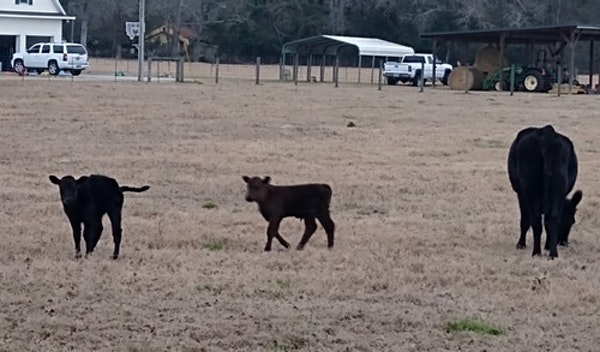 Our next door neighbor has a couple of new little ones! 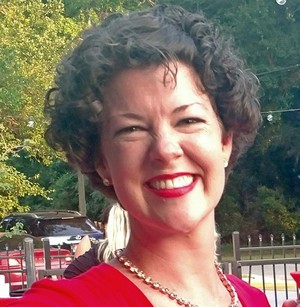 From the Desk of Mandy …

Have you ever wondered why someone who claims to be deeply religious would feel the need to tell you that they are deeply religious? Does it make you suspicious when someone who habitually gives a second-rate performance tries to tell you that they are exceptionally gifted at their craft? Why do you suppose a person would feel the need to put into words that which should be fairly obvious to a reasonably intelligent person’s casual observation? When someone tries to override our ability to discern things for ourselves, we should be driven to wondering why.

Think about this (100% fabricated) scenario:

You are standing in a yard, next to  small house. A woman comes out the door and stands beside you. “I am outside!” She smilingly announces, as though you are too stupid to draw that conclusion for yourself. So she’s outside, big deal. Who cares?

Now, go a little further. After making her announcement, the woman goes back inside, shutting the door and opening a window. Still smiling, she calls to you, “I am outside!” Okay, what’s her deal? Does she think that you are so stupid that you trust her (obviously false) words over what you are seeing with your own eyes? Either she thinks you are a fool, or she is trying to make you think you are a fool. Whatever you think her motivation is, run for your life – a lie often told is soon believed!

Our current times are confusing and can also be discouraging. We see things and read things and it seems that the only recurring theme is that we can’t trust what we are seeing and reading – but perhaps we are looking at things wrong. I read something that brought me up short, and it made me snort in disgust at my own ineptitude. It was words to this effect: “Use your own common sense.” Can you imagine? Here I am wondering who I can believe (politically speaking), if anyone, and the solution is so terribly basic that I’d overlooked it entirely. If someone claims, over and over and over and over, that they are entitled to of a certain level of respect or authority, then we should be driven to wonder – “If you are, why must you keep telling me so?” I expect it is because we are supposed to believe what we are told, not what we see.

Have you ever had to navigate a motor vehicle through six lanes of rush hour traffic? Because that entire exercise, beginning to end, was you being active and reactive and proactive based on what you were seeing. You relied entirely on your own powers of observation – and you made it through, alive. Suppose the tractor-trailer in front of you hits his brakes. Ideally, you apply your own brakes, and so does the car behind you, and the car behind that one, and so on. Just imagine that, as you depress the brake pedal, someone else in traffic yells to you “Hit the gas! It’s an open road!” What do you do? Are you going to take a deep breath and put the accelerator in the floor because you are so sure that the voice you are hearing is better at evaluating your current situation than you are? Or are you going to roll your eyes at that crazy person and focus intently on your goal of a safe arrival?

There will always be people who think they are uniquely qualified to make your decisions for you. There will always be someone who treats you like you are an inferior, and tries to make you do what is “best”, based on their own (imperfect) interpretation. The only thing that will stop them from running all over you, is you. The art of ‘self-defense’ has never been limited to physical safety; we must defend ourselves not only from physical violence, but also untrue words and false ideologies.

God endowed each of us with a wonderful thing we call a brain – but it is only useful to us when we remember to use it. 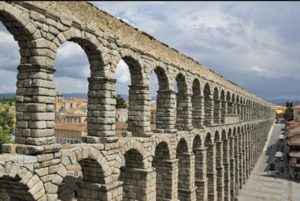 Roman aqueducts, roads and buildings are still standing after nearly 2,000 years. Their use of an early form of cement made this possible.

About 5,000 years ago, Egyptians used a mixture of gypsum and lime to make mortar for use in the pyramids. This was probably one of the first uses of the amazing man made building material, concrete.

Later, the Romans would use a material that was even closer to modern cement to build their amazing structures. It was made of lime, volcanic ash and salt water. Interestingly, it was both “greener” and stronger than the concrete we use today. (The downside was it did not set quickly and since time is money, there is little chance we would ever use it today.) Many of the ancient Roman buildings, roads and aqueducts are still standing today.

In 1824, Joseph Aspdin of England invented what we call Portland cement today. The name came from the name of a rock quarry that produced a very strong stone.

In the 1830s, there was an effort to actually measure the strength of concrete. It is much stronger (by a factor of about 10) in compression (squeezing) than it is in tension (stretching). [We did similar measurements in a Strength of Materials class I had in college.] Today, concrete is often graded in its compression strength — how much weight it will support per square inch. Typical values are 3,000 psi (pounds per square inch).

Since concrete is much stronger in compression than in tension, often steel reinforcement is embedded in concrete to increase the tensile strength. About 130 years ago, the first concrete reinforced bridge was built. It is still in use today.

Ready mix concrete began about 100 years ago. Ready mix is where the cement, water and aggregate (sand and rock) are mixed and loaded into a truck (called a mixer). The truck has a large drum with spiral paddles inside of it. The drum is turned as the liquid mixture is trucked to the job site. The spiral paddles tend to make the concrete move forward in the drum. On the site to unload, the truck spins the drum in the opposite direction and the paddles now move the concrete towards the open end of the drum. When it comes out of the drum, it pours down a chute into the forms. 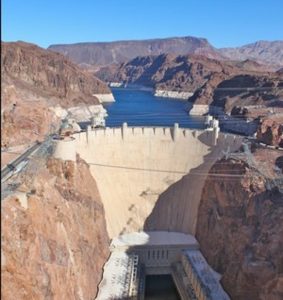 Hoover Dam (originally called Boulder Dam) was built in 1936. It is the largest concrete project ever completed. Hoover Dam blocked the Colorado River between Arizona and California. When completed, it formed Lake Meade. The dam is huge: 726 feet high (about as high as 2 ½ football fields would be if stacked vertically). It is 660 feet (1/8 mile) thick at the base. It contains about 3,250,000 cubic yards of concrete. That much concrete could build a two lane road from Brays Island to near the Big Texan Steakhouse in Amarillo, Texas.

There was so much concrete in Hoover Dam that while they were still pouring the concrete, the concrete on the bottom was setting (getting hard). An elaborate cooling system (with 582 miles of 1 inch cooling pipes) was needed to keep the concrete from getting too hot and causing fractures as it cured. (Concrete curing is an exothermic [gives off heat] reaction.) Engineering calculations indicated it would take the concrete in the dam well over 100 years to cool without the cooling system. 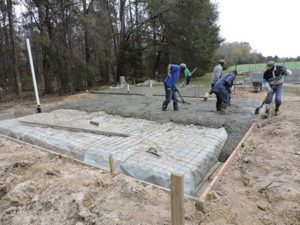 A monophyletic slab is being poured. It will be spread, leveled and troweled to create a solid floor. Note steel mesh and rebar will be embedded in the concrete.

Hoover Dam concrete pouring began on June 6, 1933 and finished on May 29, 1935. Interestingly, the aggregate in the mixture varied from pea sized gravel to 9 inch stones depending upon the location in the dam.

What does all of that have to do with building homes? Today, this amazing material is used to form footers, foundations and slabs for homes. Not only do they provide a very strong basis on which to build a home, they also provide a very strong and heavy “anchor” to hold the home in strong winds. A cubic yard of concrete weighs about two tons. That means a typical home we build with 50 cubic yards of concrete in the foundation would weigh some 200,000 pounds or 100 tons.

Concrete is a very versatile building material. Since it is a slurry, it conforms to the shape of its forms. It has no length or size limitations like lumber does. It will not rot nor feed termites. It gets stronger with age. (When Hoover Dam was tested for strength in 1995 it measured stronger than after it cured some 60 years previously.) If you are thinking about building an addition, home or simply a drive or walkway, you may well use this versatile material.