Fixed Price and Cost Plus Contracts 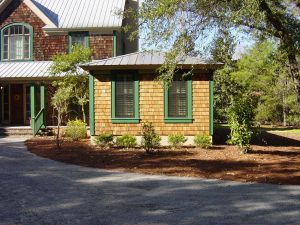 If A home can be built in 120 hours, why does it usually take much longer?

Extreme Makeover just built a nice home in Beaufort in about 120 hours. If they can do it, why does it take much longer for a “normal” home to be built?

First, the “120” hours is not truly 120 hours. For example, the exterior walls were delivered as prefinished “panels.” Building those panels was outside the “120” hours as are the cabinets, ordering windows, doors, appliances, plumbing fixtures and many other items. Still, 120 hours is an amazing time frame.

Another reason it was so quick is that scores – maybe 100 people were working on the home at a given time. As the number of people increases, the efficiency actually decreases once you reach a critical mass so if the workers had been paid (they were volunteers), the cost would have been much higher than a conventional home.

Fast setting concrete was used in the foundation and that is risky. If it sets too soon, the problems grow rapidly. Having a load of concrete set in the truck is bad news.

Obviously, if a home is built in five days, there is little time for the home owners to make decisions or change things.

Building a home quickly reduces the cost – to a certain point and then the cost goes back up. If you want a home built in the optimal time frame, call us. We schedule tightly, but don’t simply throw workers at our jobs. 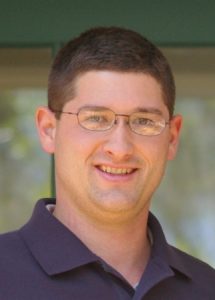 During January, Willis Sinclair Homes participated in the Extreme Makeover home that was built in Beaufort.

It was cold when we arrived on the job about 7:30 am on Friday. Much of the framing was completed in spite of the harsh weather. Still, it was running several hours behind – probably because of the frost covering everything.

We worked on leveling walls, re-framing a wall or two and finishing up some framing details to get ready for the roof.

Building a house in just 120 hours is an amazing challenge. This was no ordinary house, either. It is a 3800 square foot house with large porches and a separate garage.

We can build a wonderful house for you, but it will take a little longer than 120 hours.

Call us. We would love to talk with you. 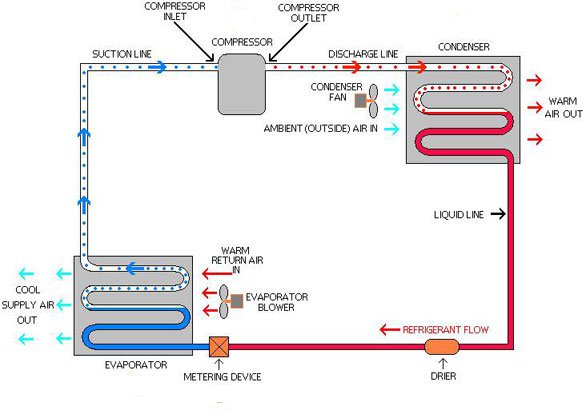 One of the more expensive parts of your home which needs periodic attention is the HVAC system. (Heating, Ventilation and Air Conditioning)

By understanding a little bit about HVAC systems, you will be much better prepared to talk with a repairman.

In western states where it is dry, home cooling is achieved by exactly this phenomena. Swamp coolers blow air over water that is evaporating. The cool air (remember evaporating liquid absorbs heat) is then directed into the house.

Swamp coolers work only where the humidity is low (and thus water evaporates easily).

In the rest of the world, the fluid that is used – called refrigerant – is a complex chemical. For years, Freon, a brand of refrigerant, was the standard. Today, there are a number of different refrigerants, but the principles are the same.

A liquid refrigerant (red in the drawing) flows through a metering device (an expansion valve where it evaporates or boils (turns to a gas). That absorbs heat – a lot of heat, making the pipes it flows in cold.

Air is blown over the cold coils and into your home.

The gaseous refrigerant (blue dots) then goes back to the compressor in a large copper pipe. At the compressor, the pressure is increased dramatically. When a gas is compressed, it gets hot.

The hot gas (red dots) go to another coil where it is cooled by the outside air. When the gas under pressure is cooled, it condenses or turns back to a liquid (solid red). (The drier is there to remove any minute bits of moisture in the system.)

The cycle repeats. Heat is absorbed in the evaporator and expelled in the condenser. The cycle is the same for your automobile air conditioner, refrigerator or freezer.

That is exactly what a heat pump does. It does not physically move the coils, but it reroutes the refrigerant with a “reversing” valve. Both the evaporator and condenser are very similar. They are basically copper tubing with aluminum fins.

The refrigeration cycle is nice because there are only three motors in it. Two are fans: one inside which circulates air through your house and one outside on the top of the unit (the condenser fan).

The third component is the compressor. It is a powerful electric motor with a pump attached to it. The motor and pump are then sealed hermetically in a steel can. It is the compressor that draws most of the power. Typical pressures on the hot gas side are hundreds of pounds per square inch in today’s systems.

If a system is kept clean so air flow through both the condenser and evaporator coils well, pressures are minimized. If they become dirty with dust, leaves or debris, the compressor is forced to pump harder to get the hot gas to condense (liquefy).

Electric motors typically have two main failure modes: mechanical (a bearing failure) or electrical (a shorted winding). A bearing failure will often result in an electrical failure unless it is caught quickly.

If an electric motor is shorted, it will draw a very high current and trip circuit breakers very quickly. A shorted motor has to be replaced (fan or compressor).

If the air coming out of your condenser outside is hot (if you are cooling your home), the system is working – maybe not as well as it could be, but it is working.

Other failure modes are: broken or leaking copper tubing, stuck reversing valves and other mechanical problems.

Sometimes, replacing a compressor can be costly enough it is worth replacing the system particularly if you are replacing a low efficiency system with a high efficiency one. Some fan motors are expensive, but an air handler (the evaporator and evaporator fan) are also expensive.

Sometimes air conditioner technicians recommend replacement because it is easier (and more profitable) than repairing a system. You also need to be aware that reportedly some air conditioning companies actually pay their service technicians a commission on parts they sell!

We will even help you figure your savings if you decide to replace your system with a higher efficiency (SEER rating) one.

Call us. We can help.