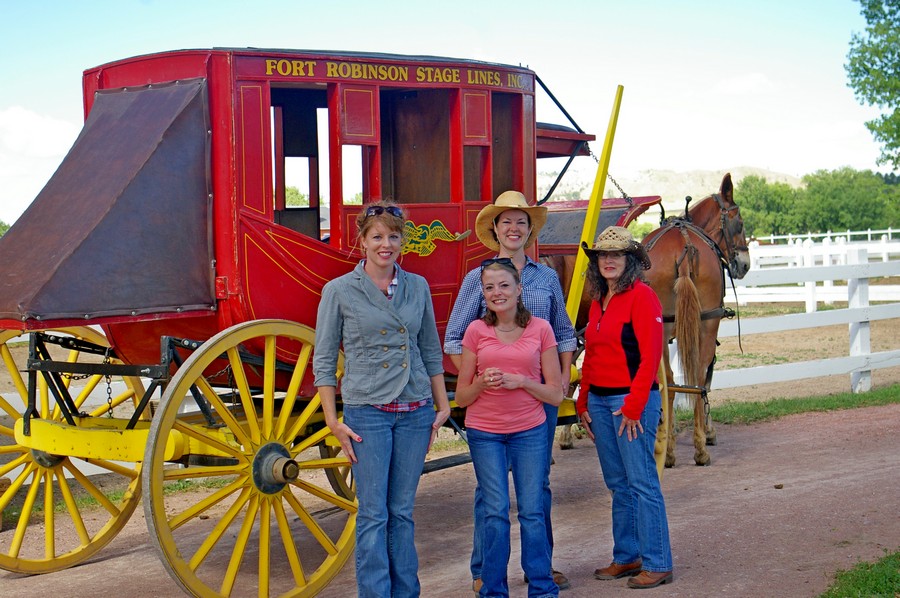 Abbey, Jessy, Mandy and Kandy ready to board the stagecoach for a ride at Ft. Robinson State Park, Nebraska in 2012. 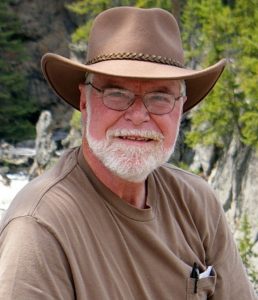 As I write this (the first part of June), we are finalizing details of our trip the last half of June.

On June 16, Kandy, Mandy, Jessy and I plan to take four more grandchildren on a tour of the West. We will be making stops near Knoxville, Tennessee and Springfield, Missouri to pick up four grandchildren (2 granddaughters and 2 grandsons).

This year, we plan to start in St. Joseph, Missouri, the eastern end of the Pony Express route. From here, we intend to follow the Pony Express west the best we are able (some of the route is on private land) until the middle of Wyoming. 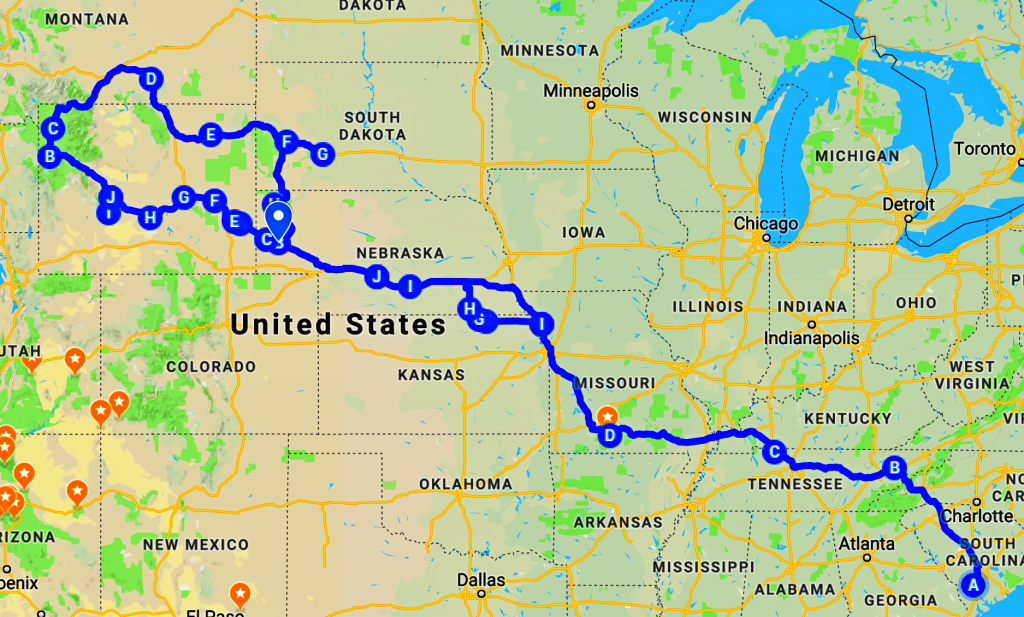 At Scottsbluff, Nebraska, we will stop to see Rebecca Burdick Winters’ grave site. Mrs. Winters died in 1852 on the way to Utah. She contracted cholera and within 12 hours she died. One of the fellows in their wagon train stayed up all night engraving her name on a wagon rim to mark her grave site. That rim and her remains are now in a small roadside park in Scottsbluff.

From Scottsbluff, we will drive through central Wyoming and then turn north towards Grand Teton and Yellowstone National Parks.

My brother and his wife, who live in Denver, will meet us in Yellowstone for a couple of days. We will see geysers, a petrified tree, boiling mud, hot springs, water falls and all sorts of wild animals (bison, wolves, elk, bears, etc.)

After we explore Yellowstone for a couple of days, we will turn back east. We will visit the site of Custer’s Last Stand in Montana. We will see Mount Rushmore. We will spend a couple of nights at Ft. Robinson, once a cavalry fort and now a state park. We might even get to see a Pony Express rider! There is a re-ride each year and we just might get to see it!

Ft. Robinson State Park has a number of activities which will probably interest the grandchildren: horse back rides, stagecoach rides, hay wagon cookouts and even a rodeo.

I’ll be posting photos of the trip in the next few months. Watch for them online (willissinclair.com) and in the newsletter.

If you are thinking about building or doing a significant remodel or addition, you will probably need an architect. An architect is basically an artist who designs a home that is pleasing to the eye and functional for the home owner.

Typically, an architect will draw plans to meet your needs and desires. After a few iterations, when you and the architect are happy, the plans get turned over to a structural engineer. His job is to make sure the design is sound from a structural viewpoint. This is important given we live in hurricane and earthquake zones.

Fees and functions can vary widely among both architects and engineers. As is often the case, the better the product, the higher the cost.

In the past few years, home design has changed from pencil and velum to CAD (Computer Aided Design) software. Some architects have made the change, some have not and some are in the middle somewhere.

One of the powerful features of a CAD design is (or certainly should be) the ability for the computer to update every relevant sheet of the plans when any change is made.

Some architects seem to use their computer as basically an electronic pencil and don’t seem to take advantage of the computer’s abilities. While drawings done with a computer look much nicer than hand drawn plans, they suffer from the same – did I update all places this change appears? – problem. 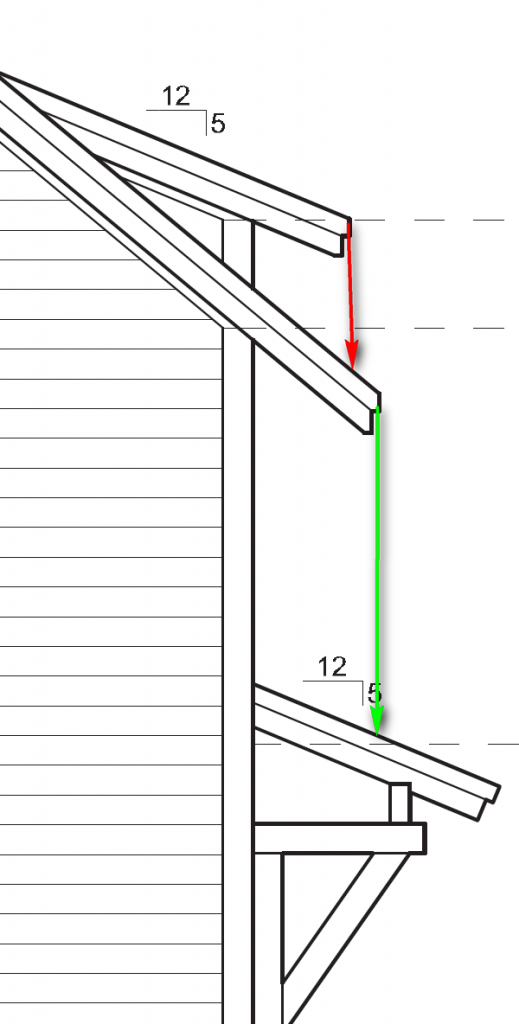 When there are dozens of sheets of plans, it is tedious to keep up with all of them and thus it is not uncommon to see conflicting drawings of a feature. In an ideal world, a good CAD system would solve this problem.

The second drawing of the same home shows the dormer and main roofs, but the roof over the door is missing.

In the builder’s mind, the question becomes, “Does that missing roof exist?” 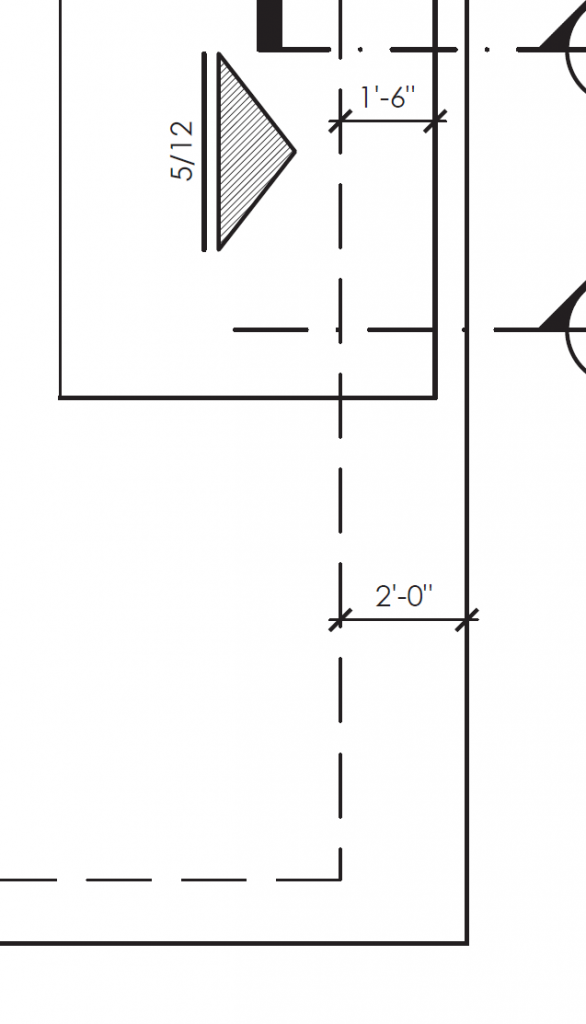 The roof plan of the same building does not show the garage “eyebrow.”

Is it a “show stopper” if an architect does not use all of the capability of a computer? No, of course not. It does mean (or should mean) the architect or draftsman needs to be extra alert to keep all drawings consistent.

Some engineers seem to be “cut and paste” (back in the day, we used to call them “Xerox engineers”) engineers. That is, they seem to copy detail blocks from previous plans and put them into current plans. While that works in many cases, sometimes, it does not.

How do you spot a “cut and paste” engineer’s work. One way is to see if all detail blocks are relevant. If there is a detail showing how to build piers and the house has no piers, you might be looking at a “cut and paste” job. Of course, it could be that some of the house design changed rendering a detail unnecessary. It could also be the detail was pasted. 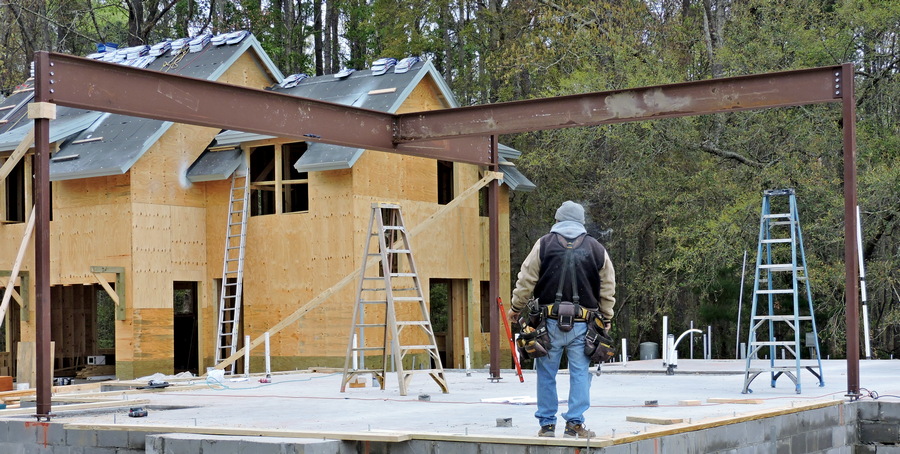 This home required significant steel beams designed by the engineer to make it structurally sound.

Since cutting and pasting is fast, “cut and paste” engineers are usually less expensive than other engineers. If a home does not have any unusual loads or areas to support, an inexpensive engineer will probably suffice. If there are unusual loads or overhangs or such, a more detailed oriented engineer might be in order.

How then do you find a good architect?

There are several ways. Ask friends or neighbors, but be careful how you ask. Most people will say “Yes” if you ask if they like their architect. Ask if they would use the same architect if they were going to build a new home.

Talk to architects. Explain what sort of house you want. Look at the types of homes they design. Is there a match? Ask how they use their CAD system. Ask about the engineers they use. Ask if their price includes a full structural package or an abbreviated one.

If you would like any input about selecting an architect, call us. Even if we don’t build your house, we are always here to help. All architects have pros and cons so the secret is to find the best fit.

Our goal is to earn your unreserved recommendation!