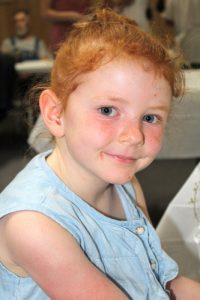 In June, Kandy and I (Bill) went to southwestern Missouri to attend the high school graduation ceremony of two of our grandchildren.
It was a very nice trip (except for fuel prices). Our country seems to be getting back to normal.
We got to visit with 7 of our 8 children and 29 of our 37 grandchildren in a period of about a week.
This is Natalie, one of our beautiful granddaughters, at the graduation for one of her older brothers and one of her older sisters.

From the
Desk of Bill

We are officially in hurricane season. This would be a very good time to have the trees around your home inspected and trimmed. If we have a hurricane, it is likely most of the damage will be done by trees. Call us (843 846 2500) and Mandy will have someone check your trees for potential problems.
I am hesitant to write objectively about green energy because it is a very politically charged subject – maybe not as much as the election fraud of 2020, but still politically charged.
Unfortunately, much of the information we have about green energy comes from (seemingly empty) talking heads who don’t have much of a scientific background. They say or write basically what is politically correct and what their bosses say.
Honestly, I am much more concerned about being factually (scientifically) accurate rather than politically correct. I am not trying to win any government grants so I don’t have those restraints. Nor do I have any political aspirations. I’m just a guy trying to do the right thing.
I do have a good engineering background. I earned a BS in Electrical Engineering (with honors). I have written technical papers and articles. I have been awarded six United States Patents. If you flew on an airliner in the free world between the 1970s and 2000, you probably had some circuits I designed on the flight deck of your airliner. Literally millions of copies of some of my designs have been put into production (in televisions). I am a Professional Engineer (Florida).
Although I have a good engineering background, I am certainly not holding myself out as any sort of expert – I just have a logical, inquiring mind. The article in this month’s newsletter is basically my reflection on green energy and climate change. It is not an engineering analysis of any sort – just my pondering.

If you really want to save energy, you can focus on better insulation in your home, better insulated windows, more efficient appliances, using ceiling fans and raising the interior temperature of your home a degree or two. Those items work and will save energy. They might not be as politically correct as solar or wind power, but they are very effective ways to save energy.

While I am probably rocking the boat, perhaps a few words about Global Cooling, Global Warming, Climate Change are in order. Again, I believe this is being driven by (seemingly empty) talking heads with little concept of basic science. The Earth’s atmosphere is always changing (it’s called weather).

Is the earth heating or cooling? No one knows because no one knows how to measure the temperature of the earth. Certainly, you can measure it at certain locations, but what then? When do you take the measurement? Noon, 6 am, when? What if it is overcast? What if a field near your measuring location has been freshly plowed (plowed fields typically absorb sun and thus become warmer than a pasture.) Do you average them all? How many points do you need to measure? Keep in mind the earth has a rather large surface: nearly 200,000,000 square miles (128,000,000,000 acres). Much of it (about 70%) is water.

If we cannot accurately measure the Earth’s temperature today, we certainly cannot honestly say it is warming or cooling. Remember the sidebar about studies above. If you want to end your career as a climate scientist, all you have to do is write an article questioning some small aspect of climate change. No matter how accurate you are, your career will be over. It seems climate changers do not allow any dissent — reminiscent of the “flat earthers” of years past.

I am sure you have heard of the record high temperatures a few days ago in the Pacific Northwest (Portland and Seattle). The temperature was breaking records (for those locations). What you may not have heard is they are experiencing record cold at Scott Base, Antarctica: -115º F during the same time frame. That is cold enough that CO2 freezes. It is only about 4 degrees above the coldest ever outdoor temperature recorded in the world.

How about the sea level? Is it rising or falling or do we know? We don’t know for sure. How do you measure it? Land masses move higher and lower depending on many different factors. If you measure against the land, are you measuring the land’s movement or the water’s movement or both. How about the Moon’s proximity to the earth? When the moon is closer, the pull on the oceans is greater, so sea levels increase. If you search “is the sea level falling?” you will find about as many articles that say “it is rising” as articles that say “it is falling.” That is because no one really knows.
Perhaps GPS could measure the sea level, but considering the GPS satellites are about 12,540 miles above mean sea level brings up a question about precision. Allegedly sea level is rising or falling only a tiny fraction of an inch each year — maybe 1 mm (about 0.04 inches).
Since the satellite is roughly 794,534,400 inches above sea level, determining a 0.04 inch change stretches the imagination. In metric, satellites are about 20,181,173,760 mm above mean sea level. You are looking for that number to change by 1. Good luck. GPS altitude information is accurate within several feet (+/- 10 feet or +/- 3,000 mm is not uncommon).
Perhaps the best take away is don’t be wasteful and do be responsible. Don’t fall for all of the hype that seems to fill the airwaves. Do enjoy your summer.
Tags:climate change, green energy, solar panels, wind chargers

Remember that failure is an event – not a person.