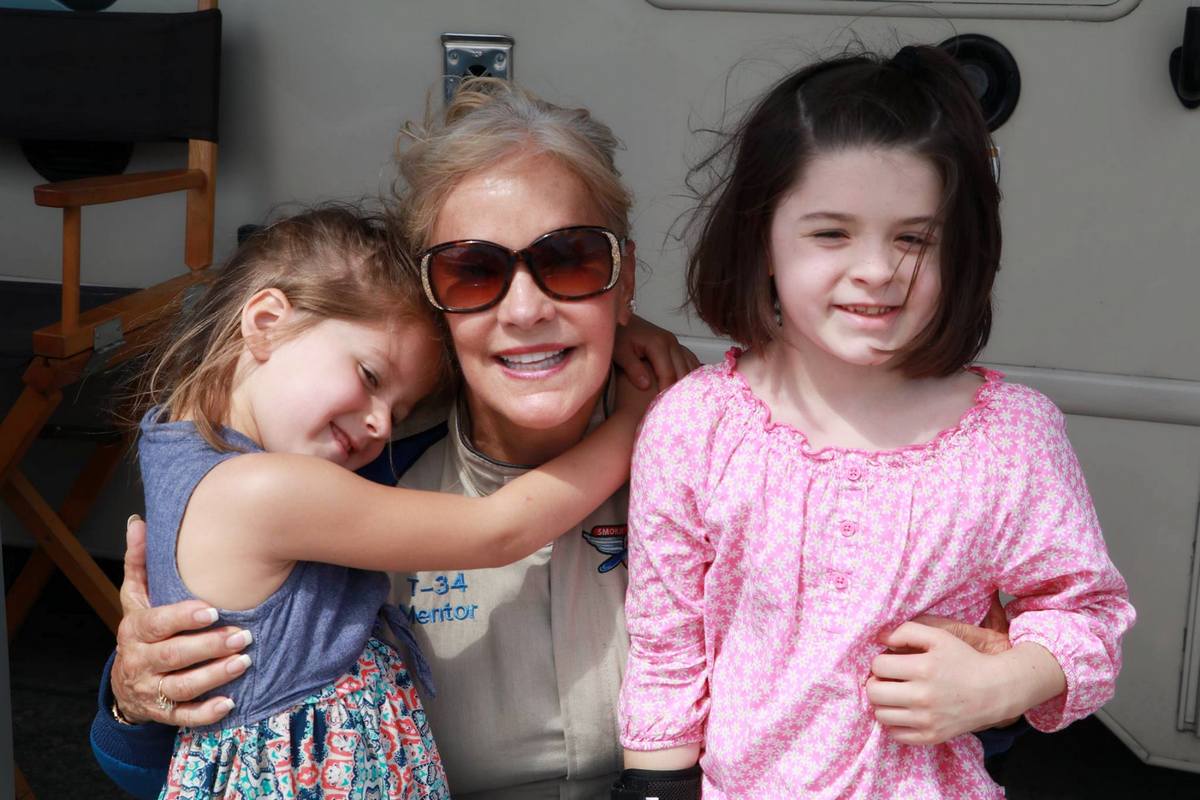 Jane, acrobatic pilot Julie Clark and Kandie at the Beaufort Air Show. See my column for notes about Julie Clark.

Towards the end of April, we attended the Beaufort Airshow. I enjoy wandering through airplanes (the static displays) and watching the pilots perform amazing acrobatics.

I must have been about twelve or thirteen when I attended my first airshow at Scott Air Force Base in Illinois. The main thing I remember about that show is a fighter pilot let me sit in the seat of his fighter. It was amazing. His only caution was, “Don’t pull the red eject lever!”

For a moment in time, I was a heroic fighter pilot taking care of “bad guys” who were threatening our country.

During my time designing avionics (airborne electronics such as RADAR and flight navigators) I flew in a number of small general aviation airplanes. Although I toyed with the idea of getting my pilot’s license, I could not justify in my mind spending the needed money on what would be an expensive hobby.

Over the years, we have gone to a number of air shows. I remember seeing the F-117 Nighthawk, our stealth fighter, in Knoxville at an airshow. The airplane was fenced with a couple of (supposedly) armed guards watching it.

We have watched the amazing B-2 Spirit stealth bomber fly at previous Beaufort airshows. We have wandered through cargo planes and bombers. We have examined the bomb bays of B-52s.

Maybe that seems sort of boring for many, but for a young (or not so young) guy, it is fascinating.

One of the things I noticed at this air show was the amazing age range of the pilots. One of the acrobatic pilots will turn 78 years old in July.

Julie Clark, the pilot who visited with Jane and Kandie (and is in our cover photo) has been flying some 50 years and performing in air shows 32 years. She will be 71 in July. She was a captain of an Airbus 320 at Northwest Airlines and has flown over 30,000 hours accident free. (That is about 15 years at 8 hours per weekday.) She is rated in over 66 types of airplanes.

On the other hand, some of the Blue Angel pilots seemed to be on the other end of the age spectrum. I realize the older I get, the younger everyone else seems, but even with that factored, some of the pilots must have been in their 20s – maybe late 20s, but still 20s.

If you get a chance, catch an air show. If they are at a military base, they will probably be free. If they are held at an airport, there may be an admission charge, but in my experience, it will be modest.

Hurricane season is upon us. Make sure you have made arrangements to have your home secured – just in case. Call us. We can help. Obviously, we attend to our customers first, so if you wait until there is a storm on the horizon, we will do our best to help you, but realize our customers and those who have made prior arrangements with us come first.

The 2019 hurricane season runs from June 1 to November 30. Occasionally, hurricanes occur outside of the “season,” but 97% of all storms (affecting the United States from the Atlantic or Gulf – the green arrows) happen during the official season. 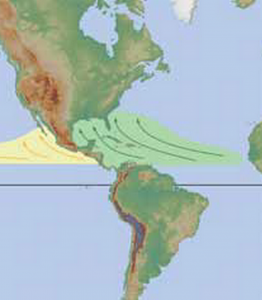 Only about 3% of the hurricanes (originating in the light green area) occur outside hurricane “season.”

While the chances of a direct hit from a hurricane are low, the stakes can be very high. Storm surges can cause significant flooding particularly in the low areas on tidal water. Probably the more likely cause of problems is falling trees or blowing debris.

The rain that comes with hurricanes can saturate the ground. When the strong winds come, trees are often uprooted if the ground is water softened. If the wind is strong enough, trees just snap. If your house or vehicle or fence is under them, it may get crushed.

Although utilities are underground in our area, they are not underground before they reach us. That means a storm will likely result in power outages. These outages mean no air conditioning unless you have a generator and a tank of LP gas. No air conditioner for an extended time means mold and mildew are likely. 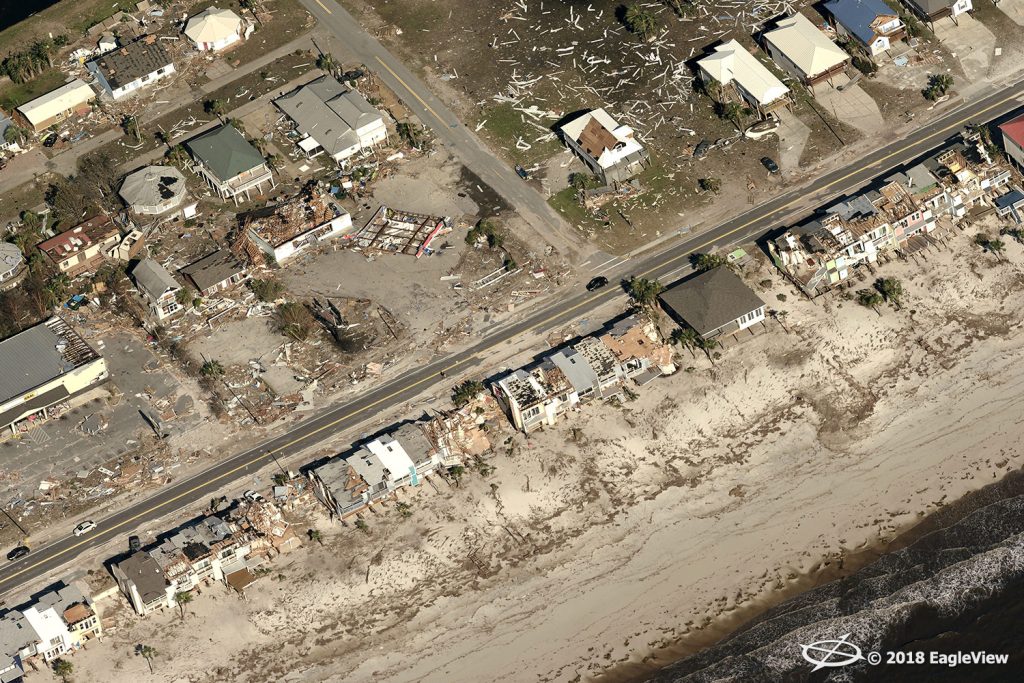 Hurricane Michael (category 5) did this in 2018 to Mexico Beach, Florida on the gulf coast.

What can you do? Call us. If you make arrangements with us, we will do whatever you request when we hear an official report that a storm is due to hit. You don’t have to do anything else. Of course, there is no charge unless we have to take defensive measures because a storm is approaching. Clients who make prior arrangements will get preference. We will have a finite amount of time to do prep work before we are forced to leave.

We will bring all of your lawn furniture or other items that may blow inside. We will cover your windows if you have window protection. We will do any other tasks you wish before a storm’s arrival.

After the storm passes, we will check on your home and report any problems. We will remove and store window and door protection. We will distribute lawn and porch furniture as it was before the storm.

If there are issues that require immediate action (such as a broken window or penetrated roof), we will do whatever is necessary to mitigate damages. Once things stabilize, we will repair or price repairing the damage – your choice. We will give you a verbal, written and/or photo report of any damage.

If you are planning to stay in your home during a storm, be sure you have plenty of non perishable supplies including water. Even if you have a well, if you don’t have electrical power (you likely won’t unless you have a back up generator with sufficient LP gas) you cannot get water from it.

With no water, you cannot flush toilets and you cannot shower even if you have other beverages to drink. Keep in mind during and after a storm, the humidity will be high and it will be very uncomfortable with no air conditioning.

It well might be several days until the roads are passable so you can get out for supplies.

If a large storm is coming, it is probably best to leave. Homes can be replaced or repaired. People cannot.