26 Dec October 2022: Your Front Door Should Reflect Your Tastes 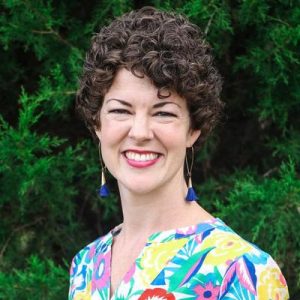 From the Desk of Mandy

For as long as I can remember, my parents have had an embroidered version of this saying hanging on the wall.

I find it fascinating now, just as I did when I was a child.
­Seeing it would make me think about preparation and survival, and the way they relate to each other. I would also ponder the opposite: “Those who do not prepare to survive do not deserve to survive.” (Now there’s a thought-stimulating sentiment — and very relevant to me as a middle-school student that had failed to study for a history test.)

The saying always makes me think of preppers, in general. “Preppers” is a term used to describe the people who stockpile supplies (often food, currency, or … toilet paper) so they can comfortably ride out a certain amount of time (during natural disasters or civic unrest) when the basics aren’t readily accessible. It seems that every disaster highlights two groups of people: the preppers and the looters. The preppers prudently put aside some necessities ahead of time; the looters sift through the aftermath of a disaster to see what they can get out of it.

Preparedness shouldn’t be limited to long-term food storage; being prepared is an essential (though fast-fading) part of being an adult. Whether we’re pondering questions of eternity or simply considering how soon to start studying for that upcoming history test, it’s always better to be prepared. 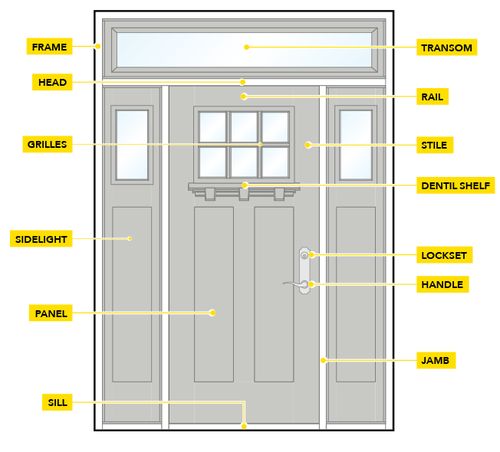 There are a number of terms associated with exterior doors including front doors. Since this is a single door, there is not an astragal (the vertical board between two doors) shown. The sidelights can be partial glass as shown, full glass or no glass.
Normally, front doors swing in although Florida requires them to swing out because of high wind threats. An inswinging door has only the hinges and latch to prevent them from opening in a strong wind. An outswing door has the door stop (the wood around the door that holds the seal. Here in South Carolina, we see both inswing and outswing exterior doors. Somehow, it seems more inviting to me to have an inswing door to invite people into your home.

and one that goes down into the sill or floor. The three point latch (roughly) triples the force needed to force the door open.
­ 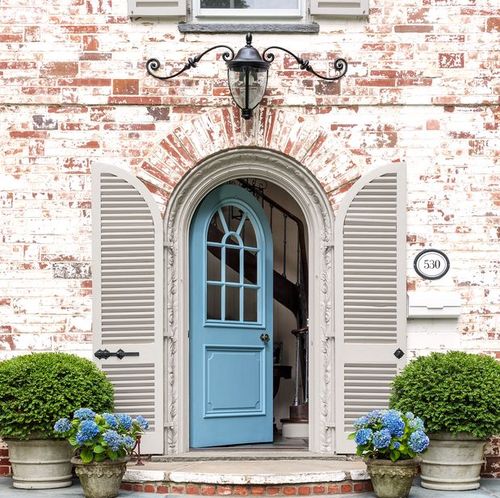 Although a door like this would look out of place on a main house, it would look cozy on a cottage or guest house. Notice there are also shutters to match the round top door.

Front doors can be a single door or double door. Double doors usually have an astragal to insure they seal tightly.

In addition to the number of doors, a front door may have a transom (window over the door) although transoms are not unique to front doors. 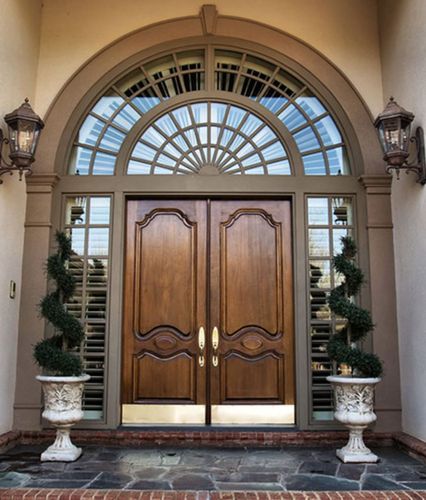 This over the top entry has double doors, two full glass sidelights and an arched transom. The doors are mahogany panel doors with brass kick plates.

Exterior doors are typically 1¾ inches thick. Another common thickness for doors is 2¼ inches. These doors are heavy and have a solid feel. The material used in the door is also a variable. There are seemingly endless choices.

The shape of the doors is also a variable. Most are rectangles although some have semicircular tops.

If you have an existing home (and not currently building a new home), you can refresh your front door sometimes with stain, paint or perhaps added trim. The front door assembly can even be replaced as long as the new door assembly and the existing assembly are roughly the same size and shape. Keep in mind any color changes will probably need approval from the ARB.

If you have questions, call or text us (843 846 2500) or email us (info@willissinclair.com. We will be glad to discuss options with you. No cost or obligation on your part, of course.

Next month we will discuss troubleshooting techniques.